It did indeed happen!

I went to Zagreb Croatia at the end of August and not only did I see a fabulous Duran Duran concert,  not only did I walk away from the concert with a three foot beach ball that was bounced around the audience during the finale, not only was I honored to meet three band members, but I handed those three members each a copy of Speaking in Feline!

Since I was 12, I had very much wanted to meet one or more band members, mainly the bass god, John Taylor. Over 30 years later, I was becoming very discouraged that this would ever happen. After I was given some excellent pointers from my dear friend, Durandy, my husband and I embarked on a journey to Europe to catch a show and, most hopefully, a Duran moment.

We were given a tip on which hotel they were staying at, so that's where we went and spent the day, becoming increasingly aware that the lobby was filling up with middle-aged schoolgirls, like me, ready to pounce.

After several hours of waiting, there was a stir among the patient Durianies, and suddenly, there they were, Duran Duran, coming into the lobby from their limo! The Duranies soon surrounded Simon LeBon and Nick Rhodes. I didn't have a chance at getting their attention because I was too slow. So I looked around. Roger Taylor was about ten feet away from me. I was about to approach him when, at the corner of my eye, I found that John Taylor was almost right next to me! So, of course you wonder, what did I do? What did I say?

I froze. He stepped away, back to the front door of the lobby. My husband nudged me and urged me to, "Go! Go after him!" So I went and caught back up with him. He was peering outside the door, clearly looking for someone from his entourage.

Eager for his attention, I yelled, "John! John!"

He looked at me. HE LOOKED AT ME!

Yeah, that was smooth. I'm a dork.

Clearly, he's had that conversation before with countless starstruck Duranies and asked kindly, "Do you want a photograph?"

My husband took over at that point and said "Yes" for me. When the picture was taken, he was gone! Zip, just like that. A little braver now, I chased after him and handed him a copy of my book. Through stuttering and stumbling words of it being about Duranies in 1985, he remarked, "Isn't that interesting!" He made this starstruck middle-aged schoolgirl very happy!

(Here is a picture of him with Speaking in Feline in his hand:) 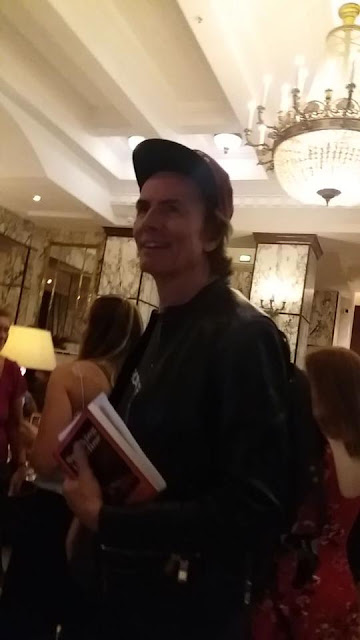 The Wild Boys then disappeared in the lift and us Duranies were left to talk about our experiences, both what had just happened and previous Duran moments, and I made a bunch of new friends. Absolutely delightful people! Even without that amazing Duran moment, they would have made it all worth my while!

The next morning, day of the concert, we were again parked in the lobby, waiting for a glimpse... or more. Suddenly, Simon breezed through, very close to where I was sitting. I stood up and (just as intelligently as I did for John) I yelled, "Simon! Simon!"

He did not slow his pace towards the hotel restaurant, and his face clearly showed that he was not quite ready for fan adoration, but he looked over at me and gave me a wave. Ok, that's cool. I can respect that he's not a morning person. Neither am I. I did not chase after him as I did with John.

A while later, presumably after he had some breakfast, he came breezing back in the opposite direction. This time, there were a few women waiting for him with gifts. Being last in this informal line, I handed him a copy of my book, eloquently saying, "I wrote it, and you're in it."

Yes, I'm a dork. But I'm a dork who had just hand delivered a second book to Duran Duran band members!

(Here is Simon with the gifts in his hands. You can see the red spine of the book among the other gifts in his arms. That's me in front of him!) 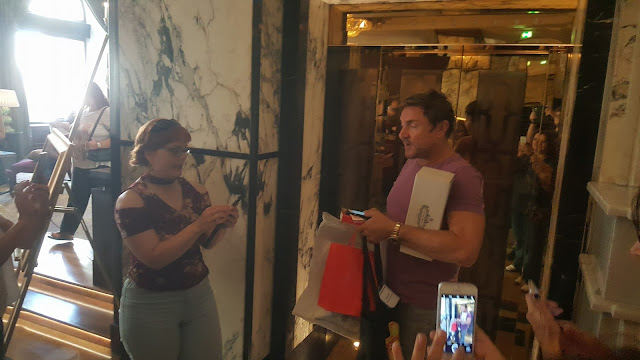 The concert was amazing. I was at the very front, in the fan pit, and on John's side. At the end of most Duran Duran concerts, they play Rio as a finale, and during that time, there is confetti and huge beach balls thrown about the audience. There was a large space in between the stage and the fan pit and the balls kept getting stuck there. I kept bugging the security guard and pointing at the balls so he would go and throw them back into play. After I kept bothering him, he simply handed me one! Then the band grouped together for a bow. Dom Brown, the fill-in guitarist, gave me a smile and did a "rock-on" hand gesture at me. Seems like having a beach ball gives a person leverage!

The next day saw me in the lobby once more. I managed another selfie with John, this time I was able to use my own words to ask for it. Then I was in a group selfie with Simon. My arm was around his shoulders.

Then came the coolest moment. I had thought that all my Duran moments thus far was adequate, but the divine spirits had saved the best for last.

I was waiting at the lifts. Nick had not yet come down and he had to come down sometime, right? Suddenly, there he was, speed-walking through the lobby and out the doors. Again, my husband nudged me, "Go! Go!" All the other Duranies respectfully held back and did not bother him on his power walk... but I was on a mission!

Book in hand, I sped down the street, shouting, "Nick! Nick!" He didn't slow down. That dude can ZOOM!

I caught up to him and called out his name a few times.

Without slowing down, he turned to me and said, not unkindly, "Be quick."

I handed him the book.

He slowed way down and looked at the cover. Then he pointed to the cover and said, "Oh! Poosie-cat!" in his lovely British accent.

"Did you?" he said very kindly.

He smiled at that.

Then I added, "And cats from outer space!"

At that, he stopped walking, threw his head back, and laughed.

In a moment, he resumed his power walk, though he turned back to tell me, very warmly, "Thank you!"

"Thank you!" I called after him.

(Here he is below. I was not able to get a selfie in that moment, but he is the fair-haired one looking over at me, the one in the hat. That's when he slowed down but I still had to move fast to keep up.) 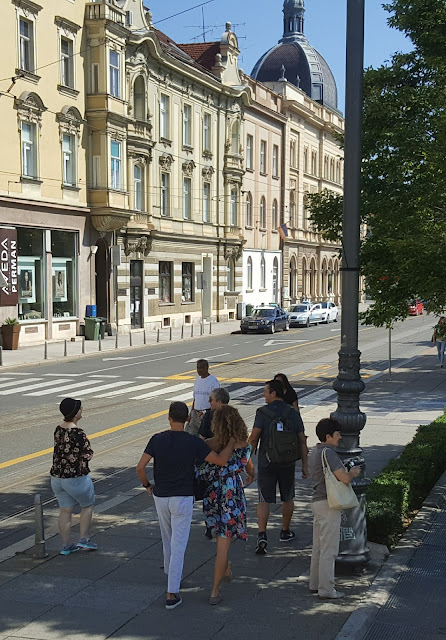 That was my finale. I could have stuck around to see if I could have more Duran moments, but I wanted the finale as it was. Although Roger was most elusive and I did not get to meet him, I am satisfied with the encounters that I did manage to have.

I might have more Duran moments in the future. I might have other cool moments concerning my book. But this was the best ending of a 32 year old wait that this author could hope for.

Thank you, Duran Duran, for an amazing moment in Zagreb, for your amazing music, and for... everything!

Thank you!
Posted by Julie Abraham at 6:47 PM No comments: