I collect matryoshka dolls, more commonly known as Russian nesting dolls. I love the little ladies, I always have, ever since I've watched the stop-and-go-animation shorts on Sesame Street depicting nesting dolls counting up to ten and back down to one.

I am also a fan of mixing good things. When you have two things that bring you joy, life can only get better when you can mix the two together somehow. And so I did.

A couple of years ago, I came up with the idea of mixing nesting dolls with Duran Duran. I looked in several places that sell nesting dolls, both traditional and modern pop culture styles, but I never saw a Duran Duran matryoshka. I needed to change that. So, I looked online for someone who makes custom-made nesting dolls. After looking at several, I decided on an Etsy site called The Attic Studio WV. I liked the artist's style because rather than focusing mainly on the face of the doll, she does an amazing job at getting the image of the whole person on the doll, all the way around!

I had a wonderful time going back and forth with her, discussing details and her sending me images of her daily progress. I think she had as much fun as I did! The end result is an absolute delight! The era I chose for their look was from the Seven and the Ragged Tiger album. The set came with six dolls so I chose the five larger dolls as band members and the tiniest bears two symbols from the album cover.

And here are my gorgeous guys: 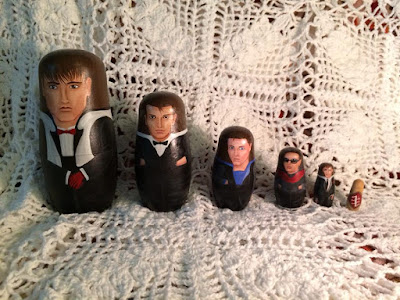 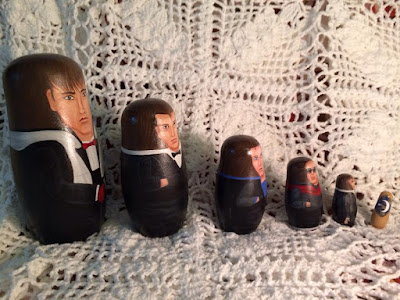 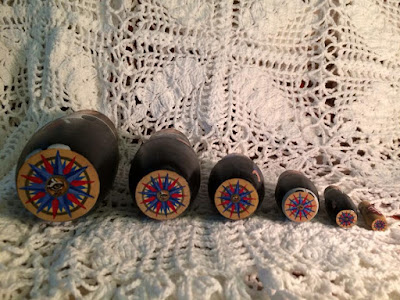 Here is the page for The Attic Studio WV: https://www.etsy.com/shop/AtticStudioWV
Posted by Julie Abraham at 7:39 PM